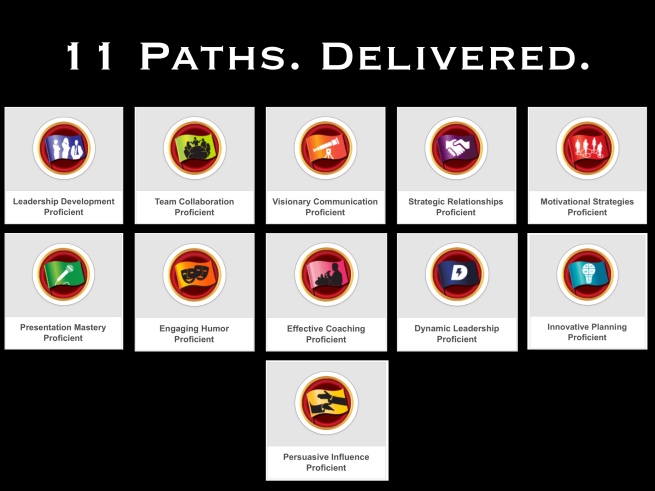 With all 11 Paths completed, not sure what’s next. According to TI, Path #12 is delayed until next year at the earliest. In the meantime, I’ll work on some legacy projects while they still count…and wait.

Now I can finally say “yes“! Check out the following email you should have received today that announces a favorite request that comes up in almost every hands on session I’ve lead: 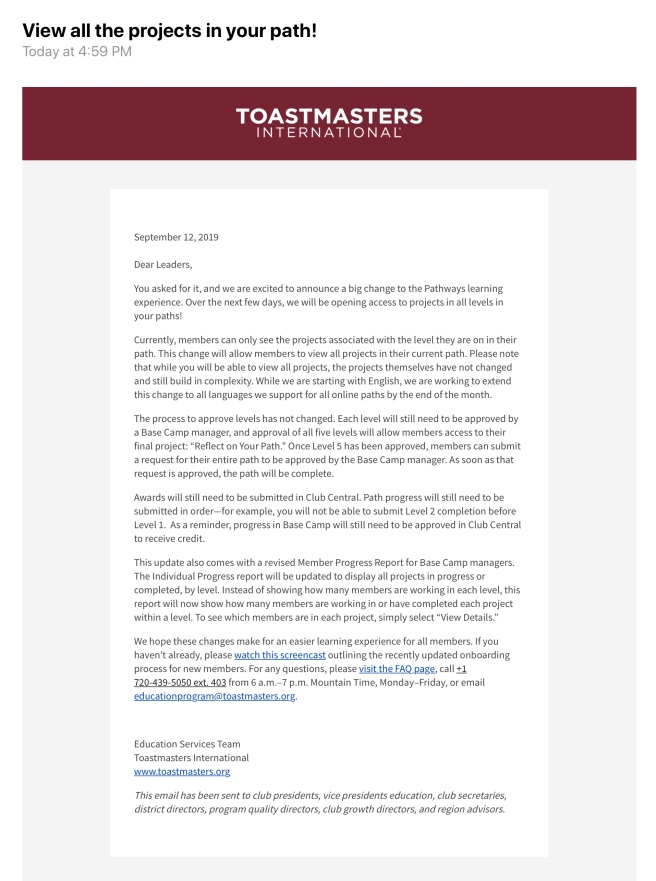 Until recently, you had 30 days to switch at no charge. That timeframe has just been extended to 90 days.

Yes. The rule through the end of June, 2020 allows you “dual credit”. One credit is for Club Coach success and one credit is equal to a year of District service. They don’t have to be used at the same time, however since the Legacy program ends on 6/30/20, if you plan on using either (or both) there, it will expire then as well. You can choose to bank either (or both) towards a Pathways DTM and that feature does not expire in 2020. Here are the specific rules from the TI web site for reference:

Check out this link: https://www.toastmasters.org/pathways-overview

Scroll down to the Paths & Projects section, and you’ll see buttons for each Path. Click on any Path to see the projects for each level, including a drop down for the electives in Paths 3, 4 & 5.

Sure. We did a multi-District webinar that was recorded. The YouTube link is here:

Although TI has been tight lipped, resisting any formal comment on this subject, reliable sources have shared that the next two paths expected are Humor and Advanced Leadership. The first one is expected by end of 2018 and the one following, sometime in 2019. I will continue to pester TI until I can get validation and specifics.

The current Pathways curriculum does not reference information that’s readily available elsewhere on the TI website. Most choose to point new members to:

…then we make sure that they spend time with their mentors to discuss further.

To further clarify, I used this example:

If I submit a Level 1 for Leadership Development then later in the year, I submit a new Level 1 for Strategic Relationships to the same club, will that club get credit for both?

Here is the response verbatim I received from TI:

The DCP goals now do incorporate the Pathways goals. This is depicted in The Distinguished Club Program and Club Success Plan on page 7 it states:

“….Note: The Toastmasters Pathways learning experience is gradually being rolled out to all regions, and the DCP has been modified to accommodate all clubs during this transitional period — whether members are participating in the current program, the new program or both.

Clubs that have members participating in either program may obtain any six of the twelve educational goals as follows:

However, Traditional awards and Pathways awards can be mixed and matched with each other. For example, if your club achieves goals 1 and P1 your club will have two DCP points. Further, if a member earns a level 1 award and a Competent Communicator (CC) both will count towards the clubs DCP.

Members can complete as many education awards as they would like; however, to receive DCP credit the rule is as follows:

“Clubs receive credit for only one type of educational award per member per year. For example, Bill Smith receives a CC award in July. His club receives credit towards their DCP goal. Later in the year, he earns ACB, ACS and/or ACG awards. His club receives credit for these too. If he also earns a second CC, ACB, ACS and/or ACG award during the same program year his club will not receive credit towards their DCP goals.

This encourages all members to progress in the educational program, not just a few. Credit for an award may be given to only one club. Members who belong to more than one club must choose which one club will receive credit for an award.”

This information can also be found in the Distinguished Club Program and Club Success Plan manual.

This above mentioned rule does also apply to level awards. For example, if a member submits two level 1 awards the club will only receive credit for one of those awards.